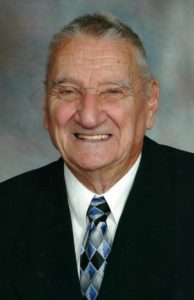 Gordon was born and raised in Beamsville. He and his brothers inherited their father’s plumbing business when Gordon was a teen, and he continued to run the business for 26 years. Gordon enjoyed helping people by generously sharing his many construction, plumbing and mechanical skills. In 1960 he and Sylvia purchased a 100-acre farm in Pelham where they raised their family.  Gordon started working at Cyanamid, where he was employed for 28 years until he retired in 1988.  Gordon was a Mason at Ivy Lodge and longtime member of the Eastern Star. He was also a founding member of the North Pelham Youth Association, to which he donated the land for a community hall which he helped to build and maintain. He donated his skills to the North Pelham Presbyterian Church for many years. His family continue to enjoy the cottage he built in Port Severn. He passed along his love of all thing mechanical to his sons, and his love of animals to all 5 of his children.

The family would like to thank the staff at Millennium Trail Manor for their care and Ed Thompson for his long friendship and frequent visits. Family and friends will be received at LAMPMAN FUNERAL HOME, 724 Canboro Rd. Fenwick on Sunday, March 3 from 2-4pm and 7-9pm. A service to honour Gordon’s life will take place on Monday, March 4 at the North Pelham Presbyterian Church, 602 Metler Rd. Fenwick beginning at 11am. Donations to the North Pelham Youth Association or the North Pelham Presbyterian Church would be appreciated by the family.