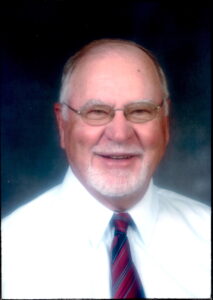 Dr J. Ronald Dowd, age 84, died peacefully surrounded by his family on May 27, 2021. He is survived by his wife, Judith Dowd (née Sauder), his children Sharon, Stephen, Jason (wife

In lieu of flowers, please make a donation to the Red Cross (https://www.redcross.ca/donate) or

If you want to know about a place, you talk to the people of that place. Dr. Ron Dowd was of Fenwick, Welland and the surrounding Niagara region. His family settled

here in the 1940s. His father, Dr Joe Dowd, taking over the practice from his brother, decided to raise his family here. Ron Dowd got his ice cream, more than once, from the Green Lantern.

Spent his summers working on Minor’s farm in Wainfleet. Played baseball with his brother Richard. Followed his older sister, Joyce everywhere. Nicknamed Doc, along with his two older

siblings as Duchess and Duke. Learned to swim at the family cottage in Long Beach. Read books from the Fenwick public library. Learned about faith at Fenwick United Church.

Witnessed the peoples’ respect for his father, the service to the community and thought, “I want to help people too.”

Ron Dowd was part of the fabric of this community. He traveled away to learn about the world: seeing Europe at 18 to attend an International Red Cross conference, a medical degree at

Queen’s University, Ob/Gyn fellowship in Toronto, residency in Boston. But after the world, Niagara was home.

Now as Dr. Dowd, he established an Obstetrical/Gynecological practice that would stretch over 32 years. That practice saw babies delivered, cutting edge surgeries, health restored while

always advocating for women’s choices. Often patients would approach him to express their admiration whenever they would see him out in the community.

So, if you were born between 1969 to 2001 in either Welland County Hospital or Port Colborne Hospital, chances are you were one of 7000 babies Dr Dowd helped guide into the world. If you

were a patient during that time, you will remember that he listened to you, supported your choices for health without moral judgement and tried to ensure the speculum was warm. For

those doctors and nurses that worked with Ron Dowd, I hope you got to witness his surgical techniques and his great laugh.

Perhaps you were part of the church congregation at Fonthill United Church from 1995 to 2018 or Central United Church (Welland) from 1967 to 1995. I expect you would have heard Ron

Dowd’s opinion on fiscally responsible decisions for church maintenance, explorations of faith and the quality of the minister’s sermons.

If you sold calves, horses, chickens, tractors or hay from 1975 to 2000, chances are you helped Dr. Dowd build his farm. You might have even earned some summer cash putting up hay,

building fences or training and showing his horses. If you were our neighbour, you definitely saw a few of our cows or the odd horse in your yard, loose from the paddocks, needing to be

Maybe you came to know Ron Dowd as one of the longest serving members of the Lookout Golf and Country Club (1970 to 2020). Whether you played with him or against him, I hope you

envied his low handicap, heard his encouragement of a good shot and accepted his generosity at the 19th hole. If you sailed out of Niagara-on-the-Lake in the early 1970’s, you would have

seen him at the helm of his beloved C&C sailboat.

Perhaps you were a snowbird, wintering in Bonita Springs, FL, from 1991 to 2016, and you have played golf with him. You may have even met him on the deck of a cruise liner, met his wife

Judith as together you saw icebergs in Alaska or castles in Germany or historical sites all over the Mediterranean and Baltic Seas.

If you ever met Ron Dowd, he would have asked your name, where you grew up, and tell you an anecdote about something you had in common. He might have told you about his family:

how he met his wife of over 55 years, how he gave us horses to ride, a strong work ethic, golf lessons, fishing lessons, sailing lessons, how smart his children were, the achievements that

made him proud, a really bad joke and encouragement to explore the world outside our hometown. Above all, a respect for others because there’s always something you can learn.

Dr. Ron Dowd built a life anyone would envy. I hope you got to be a part of his wonderful life.

Visitation will be held at Lampman Funeral Home, 724 Canboro Rd, Fenwick on June 5th, 2021 from 1pm-7pm.  Please call the funeral home at 905-892-4701 from Monday, May 31st to Friday, June 4th between the hours of 10am-1pm to book an appointment. A Celebration of Life will be held once pandemic restrictions are lifted.