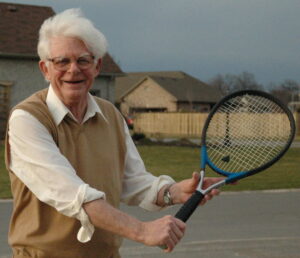 After a life well lived, it is with great sadness that we announce the passing of Robert MacKay (Robin) on July 15, 2022 at age 92.
Beloved husband of Nancy for 60 years, cherished father of Jennifer (John Rockel), and Jill (Chris Vanden Haak); loving Grandpa to Alex and Callum, and Grumpaw to wonderdog Nessie; brother to Elizabeth MacKay Turner; brother-in-law to Frank Gibbs; predeceased by parents James and Lily MacKay, brother James, close cousins Frank Luce and Barbara Luce Mumford, and parents-in-law Arthur and Mildred Gibbs.
Robin spent his childhood in Largs, Scotland, and remained deeply connected to his Scottish roots. This included a love of bagpipe and military band music, and an interest in WWI and WWII history. At 18, he emigrated to Canada, living with relatives in Niagara Falls. He completed an Honors BA in English at Queens University (1959), and teaching qualifications at University of Toronto (1961).
Robin’s first teaching assignments were in Niagara Falls and Burlington. In 1965 he began his 26 year career as Head of English at EL Crossley SS. His students reported that Mr. MacKay’s English class was never boring. He was renowned for his wit, dedication, and creativity. Students were encouraged to explore ideas, collaborate, make good mistakes, reflect, and keep at it!
He was also involved in education outside of the classroom. In the mid 1980’s, Robin was invited to be a member of the team that created and implemented the Writer’s Craft English curriculum for Ontario. Robin subsequently facilitated evening courses at Brock University for teachers interested in expanding their skills repertoire in teaching Writer’s Craft.
He was passionate about tennis! In 1966, as a Canadian Centennial project, Robin was approached by the Fenwick Lions Club to help them devise a tennis court that could be used for skating in winter and tennis in summer. That was the beginning of tennis in Fenwick! Soon the Pelham Tennis Association was created. Together with many volunteers, court supervisors, and junior instructors over the decades, the PTA came to offer tennis lessons for juniors, adults, round robins, and tournaments, and eventually an expanded club with 4 courts and a practice court. In 2007, Robin was honored by a surprise tribute for 40+ years of volunteer service on the PTA executive and the newly installed court was named in his honour – “The Rob MacKay Practice Court”.
A proud Fenwickian, Robin often commented that living in Fenwick meant being “deafened by birds”. He loved the town and his home and would get lost in the “back 40” growing everything from tomatoes to peanuts. He often quipped that “all roads lead to Fenwick”.
An avid reader, Robin was never without a book or three on the go. There was an unspoken rule amongst family to never give him a book if you might need his attention in the next two hours.
Our deep thanks and appreciation to Dr. David Dec and his team for his compassionate care over the years and to the wonderful staff of the Woodlands of Sunset for bringing daily joy, understanding, and quality care to Robin.
Cremation has taken place; arrangements entrusted to Lampman-Muir Funeral Home. A memorial service in Robin’s honour has been held in Scotland. A private family celebration of life will be held at a later date.
As an expression of sympathy please consider making a contribution towards: the “Collaborator Scholarship” at EL Crossley SS, by clicking on “in honor of” Robin MacKay at: https://bit.ly/3QDIH5K or by sending a cheque to EL Crossley Secondary School, Attn: Janet Cripps, 350 Hwy 20, Fonthill ON L0S 1E0, 905-892-2635, or alternatively, to Pelham Cares, 191 Hwy 20 E, Fonthill, ON, L0S 1E6, 905-892-5300, (www.pelhamcares.org), or to a charity of your choice.
Remembrances of Robin may be shared at www.legacy.com or www.lampmanfuneralhome.com